The below was taken from the original Saint Frances Cabrini History Pamphlet. 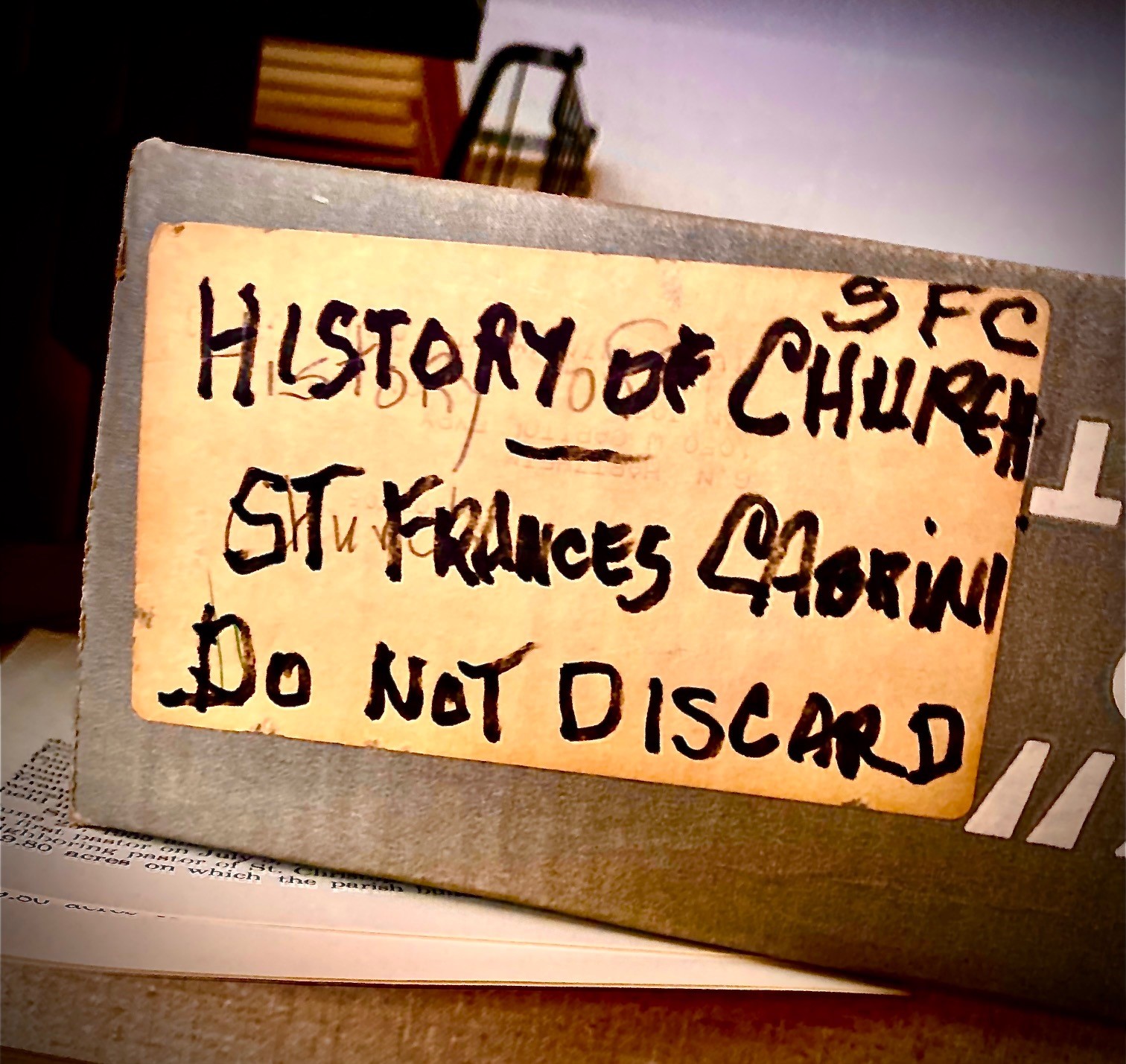 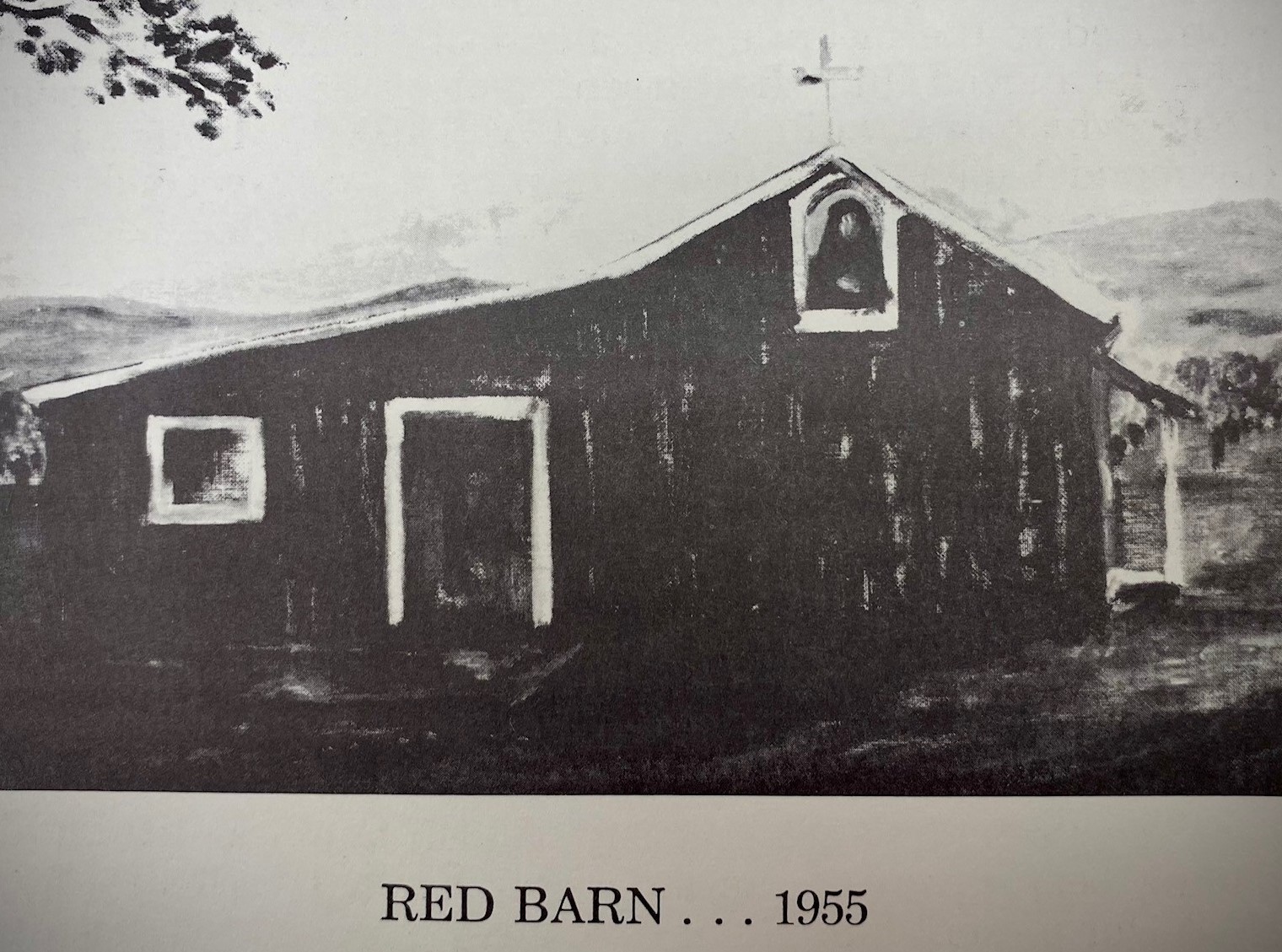 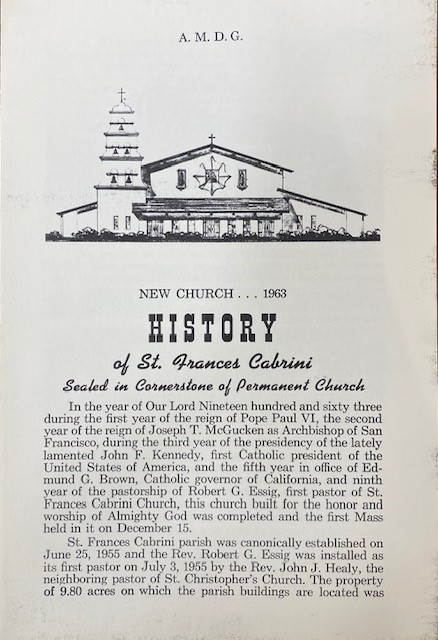 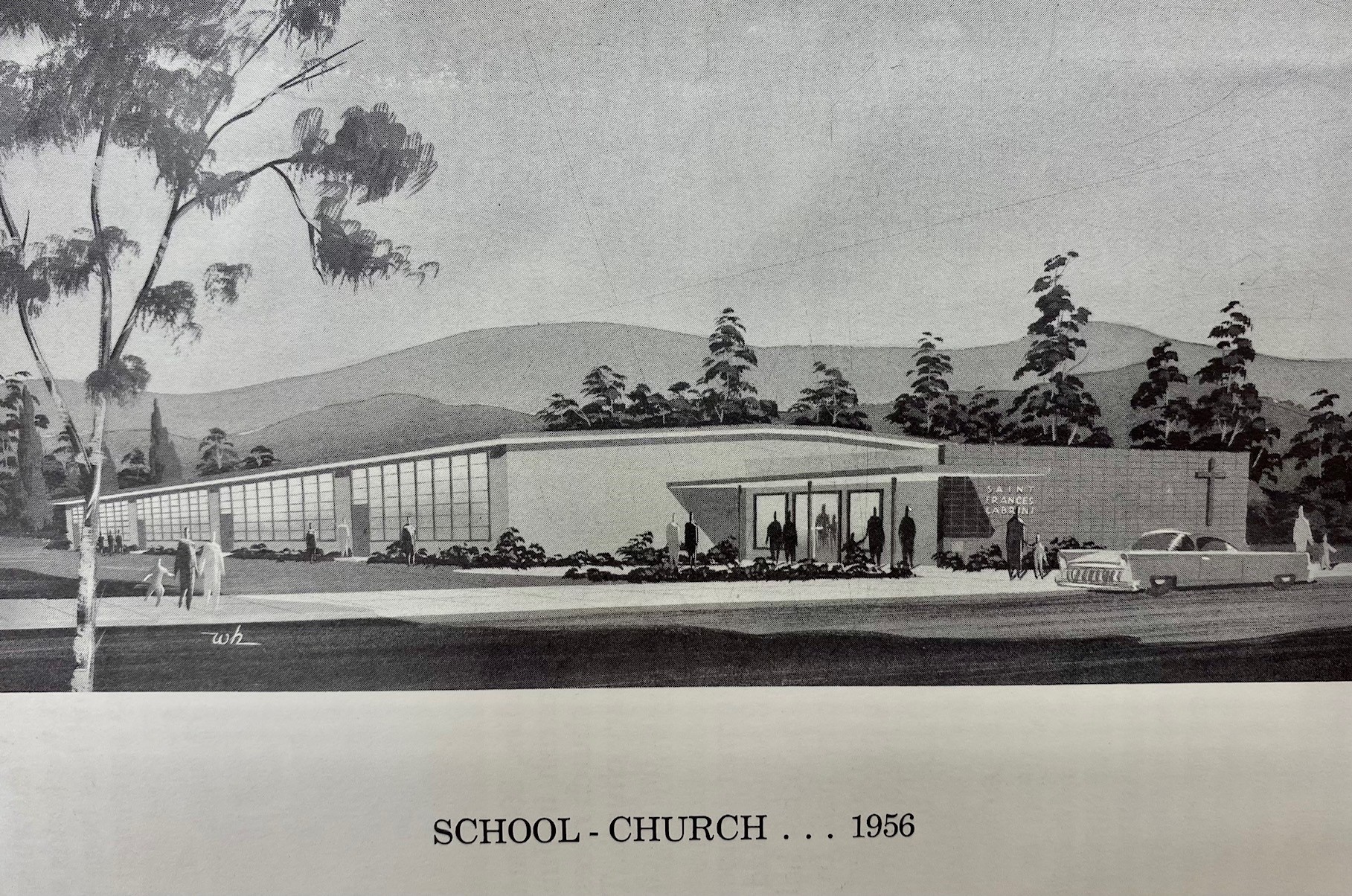 Sealed in Cornerstone of Permanent Church

In the year of Our Lord Nineteen Hundred and sixty three during the first year of the reign of Pope Paul VI, the second year of the reign of Joseph T McGuckin as Archbishop of San Francisco, during the third year of the presidency of the lately lamented John F. Kennedy, first Catholic president of the United States of America, and the fifth year in office of Edmund G Brown, Catholic governor of California, and ninth year of the pastorship of Robert G Essig, first pastor of Saint Frances Cabrini Church, this church built for the honor and worship of Almighty God was completed and the first Mass held in it on December 15.

St. Frances Cabrini Parish was canonically established on June 25th, 1955, and the Reverend Robert G. Essig was installed as its first pastor on July 3rd, 1955 by the Reverend John J. Healy, the neighboring pastor of St. Christopher’s Church. The property was 9.0 acres on which the parish buildings are located was purchased by the Hengstebeck family on August 4th, 1953, by the Archdiocese of San Francisco for $22,500. The parish started with about 325 families.

The first parish Mass was said on Sunday, July 10th in St Lucy’s school and mass was continued there until September 25th, 1955, when mass was said in our “Red Barn”, a storage shed with a double garage attached that was located on the Camden side of our property. Our parishioners had converted this into a temporary church to seat 220, by their volunteer labor and the expenditure of $800, and the donation of a secondhand furnishings from other churches. On December 16th, 1956, Mass was started in our temporary church-hall building on the Woodward Road side of our property which was designed to serve as a future school. This building seated 1000 people Mass and besides serving as a Church, also afforded the parishioners a hall for meeting purposes in half of the building. The cost of this building was $101,000, and it did yeoman service until the present new church was occupied in December of 1963. Meanwhile, our convent and first Parish School were completed in August of 1960, at a contract of $253,000.

Father Essig spent his first month as pastor in neighboring St. Christopher’s rectory and the next seven months at an apartment at 14492 union Ave where he said Mass privately on week-days. On February 18th, 1956, he moved into the house next to the Red Barn, 15300 Camden Avenue, that had been on the property for over 60 years and which had been renovated in the meantime at a cost of $1200. On January 4th, 1957, he moved into the present rectory at 15333 Woodward Road, which was built at a cost of $40,000. Meanwhile, Fr. Raymond Kelley S.J. came to help us out on weekends when we began to have Mass in our Red Barn, and it has been with us ever since. Then Father. Angelo D’Manti was appointed here as assistant on June 27th, 1959.

Our new church was started on November 30th, 1962, and was completed on December 30th, 1963, at a contract of $324,370 by Anthony Morsilli, Inc. of Hayward and George Steuer of San Leandro as architect. Angelo Lanzini, of San Mateo, as the artist and designer of the altar and furnishings, baptismal font and gates as well as the artist of the original painting of the Last Supper behind the altar. John Hogan, of Los Gatos made the 88 stained glass windows. The total cost of all furnishings was $79,745.

The present parish consists of 1943 families. 360 families have been given to the new Holy Spirit parish in June of 1963. Our present families have made the new church necessary and possible because they outgrew the temporary church. Their support and encouragement were the foundation on which the new one was built.

Our immediate plans are to convert our former temporary church into four classrooms for our parochial school and the Confraternity of Christian Doctrine, leaving the other half of the building to continue serving as a temporary hall. In five years we hope to build a permanent hall so we can convert the temporary hall into four classrooms and thus have a parochial school of 16 classrooms. Eventually, we hope to build a high school for 200 girls to serve our own parishioners. This should complete the building program of the parish.

This cornerstone was sealed on March 15th, 1964, the day our church was dedicated by Archbishop Joseph T. McGuckin. When the hand of time will have brought this edifice to nought, this scroll will be a mute witness to the accomplishments of the past, its people and its priests. May it serve as an inspiration for the new generation, and may its message evoke the suffrages of then confessors of the Faith for those who now sleep the sleep of peace.